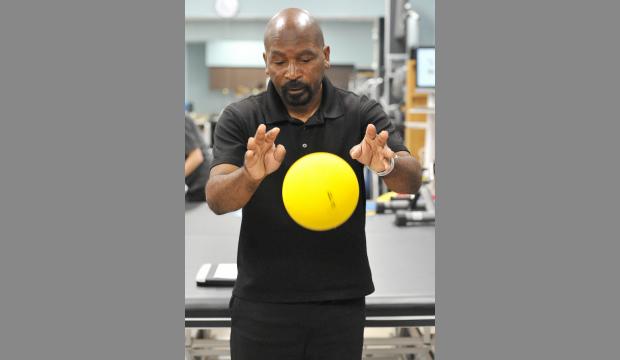 (WFMY News 2) – Richard Allen Tucker was well aware of the words on his sweatshirt as he underwent therapy at Orange Park Medical Center’s rehabilitation center, less than four weeks after being shot twice in the head during a robbery at a Jacksonville convenience store.

The 53-year-old former high school science teacher and radio disc jockey stops tossing a purple ball with physical therapist Molly Dunn to smile. He laughs at the phrase, “When my ship came in, I was at the airport,” on the shirt and says he wishes he had been anywhere else on Jan. 4.

That’s all he remembers about the day his job as a store clerk hit the “pause” button.

“Obviously I would rather have the event not been something that happened. It’s not something I concentrate on or really even give it more deep thought than the few times I have been asked about it,” Tucker said. “… I know what I have been told, I know what I have seen in news clips they put together. I know the conversations I have had with friends and family, so I am well aware of what’s happened and I understand.” CONTINUE