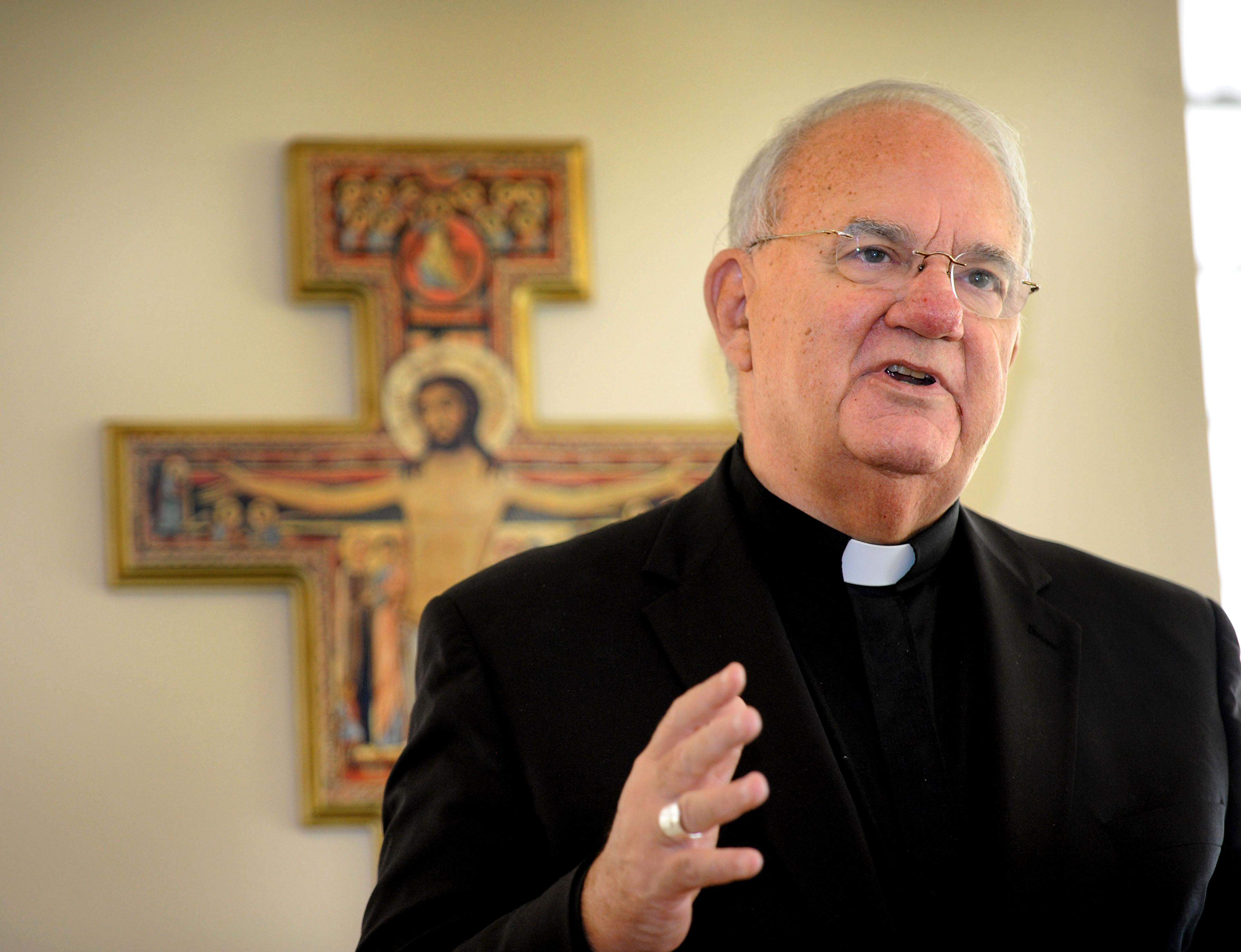 PHILADELPHIA, June 8, 2016 // Bishop Robert N. Lynch, of the Catholic Diocese of St. Petersburg in Florida, is retiring. The Terri Schiavo Life & Hope Network takes this time to reflect on Bishop Lynch's legacy as it relates to Terri Schiavo, inarguably the most internationally recognized person to have lived under his protection and perhaps the most morally significant cultural "teaching moment" during his tenure at the Diocese of St. Petersburg.

Bobby Schindler, brother of Terri Schiavo and president of the Terri Schiavo Life & Hope Network, reflected: “As a Catholic myself, any criticism I offer of Bishop Lynch is rooted in my love for, and obedience to, the role of any bishop in shepherding the faithful. That being said, Bishop Lynch has been a poor moral leader who has confused and misled the people of his diocese about my sister and the meaning and consequences of her state-sanctioned death. The worst thing that can happen when you’ve got your hand out for help is for someone to spit in it. In my family’s experience, Bishop Lynch was like the man spitting in the hand of a person in need.”

“When my family pleaded for simple advocacy,” Schindler continued, “or for simply a public acknowledgment that it was wrong to deprive my sister of food and water, Bishop Lynch instead offered weak platitudes that served to endorse an estranged husband's death wish for his wife. Michael Schiavo had not only abandoned his marital promise to Terri, ‘in sickness and health,’ but he had estranged himself from her and our family by living and having children with another woman. For any faithful Catholic, it was plain to see that Michael was living in an adulterous relationship—while at the same time actively seeking to end his wife's life. For Bishop Lynch, however, these realities were of no consequence.”

“I’ll never forget one of his boldest statements, issued in the weeks leading up to my sister’s death,” Schindler continued. “He didn’t call for mercy for Terri, or for the continuation of basic care, but, unbelievably, for my family and those fighting for my sister to ‘step back a little and allow some mediation in these final hours’ with those seeking to end my sister’s life. They were only her ‘final hours’ because men like him regarded her right to life as negotiable rather than absolute. It remains a spiritual struggle for me to come to terms with what this man did and failed to do as my bishop during the most brutal years in my sister’s life.”

“Bishop Lynch visited my daughter just once, for a few moments,” Mary Schindler, Terri’s mother, said. “And at a key moment in my daughter’s legal defense, Bishop Lynch allowed a local priest named Fr. Gerard Murphy to testify—against my daughter. Fr. Murphy admitted his testimony was contrary to Catholic teaching, and that he had permission from Bishop Lynch to share it. As a mother, I take comfort in the fact that God knows all the ways that Bishop Lynch failed my daughter.”

In Catholicism, marriage is understood to be a sacred covenant, a sacrament blessed by God as much as a relationship between two people, and critically, a lifetime commitment "in sickness and in health." At the age of 26, Terri experienced a still unexplained collapse while at home alone with Michael Schiavo, who subsequently became her guardian. After a short period of time, Michael lost interest in caring for his brain injured, but otherwise healthy, young wife. Terri was not dying, and did not suffer from any life-threatening disease. She was neither on machines nor was she “brain dead.” To the contrary, she was alert and interacted with friends and family—before her husband subsequently abandoned his wedding vows, warehoused her in nursing homes, and eventually petitioned the courts for permission to deliberately starve and dehydrate her to death. Michael finally testified, after many years of legal maneuverings against the Schindler family, that his wife had told him prior to her accident that she would not have wanted to live in a brain injured condition. This hearsay evidence led to Terri’s right to life being portrayed as a “right to die” or “end of life” issue. On the order of Judge George W. Greer, Terri was deprived of water and food and after 13 days, Terri died on March 31, 2005 of dehydration.

Perhaps the most revealing response from Bishop Lynch occurred when Robert Schindler, Sr., Terri’s father, wrote to the Bishop in November 2001: “At the onset of Terri’s trial, we had no inclination that our family was individually opposing the ‘National Right to Die’ movement and its powerful resources. … It is very clear, the objective of the ‘Right to Die’ advocates is to establish legal precedents in Terri’s case which will ultimately result in the death of many innocent victims. Our family has been drawn into this arena. We are committed in our fight to preserve Terri’s life. As a byproduct, we are hopeful our efforts will act as a deterrent to protect future Terris. My family again asks for your support in this battle against the ‘Right to Die’ movement.”

Bishop Lynch’s response came in the form of an October 2002 official Diocese of St. Petersburg press release: “The public discussion of Terri Schiavo’s right to life touches the lives of many people… Roman Catholic moral theology suggests that the removal of food and hydration from a patient … is justifiable only if the natural projected path of the individual’s medical condition will lead inevitably to death… Some of the members of Terri’s family believe her condition is irreversible and inevitably deteriorating towards death, while others do not. … The Church, however, will refrain from passing judgment on the actions of anyone in this tragic moment.”

No one—not even Michael Schiavo—argued that Terri was on a “natural projected path” that would “lead inevitably to death.” No one argued Terri was on a “path” to death, because no one argued Terri was actively dying. Terri was disabled, not dying. Her disability is what led Michael to argue that she “wouldn’t want to live like that.” Yet Bishop Lynch’s Diocese of St. Petersburg intentionally misrepresented both Terri’s situation and Catholic teaching. The consequences of Bishop Lynch’s handling of Terri’s case not only resulted in her death, but has resulted in others thinking Catholic teaching could somehow endorse the fatal starvation and dehydration of a vulnerable woman.

Tom Shakely, Executive Director of the Terri Schiavo Life & Hope Network, concluded: “In Scripture, Christ instructs us through fury at the money-changers in the temple of the just role of righteous anger, just as Pilate later reminds us of the scandal that is indifference to truth. Bishop Lynch’s actions brought scandal to the Catholic community during Terri’s barbaric death. Bishop Lynch’s conciliatory attitude toward the Culture of Death continues to carry a certain teaching authority due to his office, and in this sense his approach is a continuing tragedy for those seeking moral instruction on matters with life and death consequences.”

“We affirm, through our continuing mission of service to medically vulnerable persons, that food and water always represent ordinary and basic care, a necessity at the root of any life-affirming sense of human dignity.”

The Terri Schiavo Life & Hope Network, a 501(c)(3) nonprofit, was established by the family members of Terri Schiavo to uphold human dignity through service to the medically vulnerable. This mission is expressed by affirming essential qualities of human dignity, which include the right to food and water, the presumption of the will to live, due process against denial of care, protection from euthanasia as a form of medicine, and access to rehabilitative care. The Terri Schiavo Life & Hope Network has supported more than 1,500 families and has directly advocated hundreds of cases since its founding. Visit lifeandhope.com to learn more.